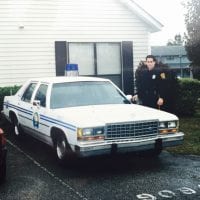 Mike Cochran’s career in public service started in 1991 as a police officer in South Carolina. In 1994 he relocated to a South Florida agency, where in 2011 he retired as an assistant chief of police. While there, he served in a wide range of operational and support capacities throughout his career. Upon returning to South Carolina and Hanahan, Mike served as the Chief of Police in Hanahan from late 2011 until his selection as the Chief Deputy of Berkeley County for Sheriff Duane Lewis in 2015. While serving in Hanahan, Mike ushered community policing to the agency and throughout the city. In November, 2018 Mike was selected to serve as the city administrator for the City of Hanahan.

During his career, he has served in various leadership roles in both local and statewide boards in order to further the professional community. Mike served as an executive board member of the Florida Police Accreditation Coalition (FLA-PAC) and as an Accreditation Team Leader for the Commission for Florida Law Enforcement Accreditation (CFA). Mike  has conducted numerous accreditation inspections throughout Florida.

Mike  earned a Bachelor of Science in Business Administration in 1990, a Master of Public Administration in 2002 and a doctorate of education (Ed.D.) in Human Resource Development. He is a graduate of the 105th Session of the Southern Police Institute’s Administrative Officer’s Course at the University of Louisville in Louisville, Kentucky. He is also a graduate of the 40th Session of the Senior Management Institute for Police (SMIP) held by PERF at Boston University as well as the 43rd Session of the Chief Executive Seminar held by the Florida Criminal Justice Executive Institute at the Florida Department of Law Enforcement. Mike is a graduate of the F.B.I. National Academy, the 246th Session. He is a member of the FBI National Academy Associates, Police Executive Research Forum (PERF), and the International Association of Chiefs of Police among other professional groups.

Mike has served as adjunct faculty for various colleges and universities where he helps develop the leaders of tomorrow while instilling the value of community policing upon the students.

Mike and his family attend Restoration Community Church in Hanahan

His spare time activities include his family, boating, serving mankind and working with computers. Mike lives with his family in Hanahan.